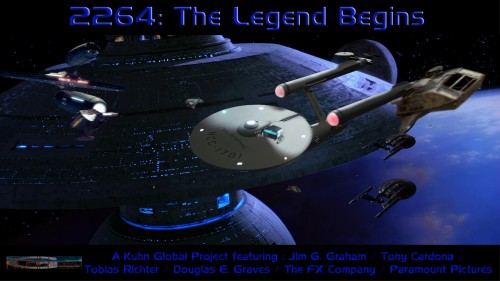 To view the above piece in it’s large size, please click directly on it.

2264…. A year that would be full of interesting events surrounding the nearly 20 year old Starship Enterprise. After a few major refits this Enterprise was almost completely new from the ship Captain Robert April passed on to it’s last Commander… Captain Christopher Pike. Now a Fleet Captain, it was time to again pass the Command of the vessel on to new blood. Fresh from his first command of a Destroyer Class vessel, and newly promoted to be the youngest Captain in Starfleet’s history, was Captain James T. Kirk. Known for his ‘unique’ command style, and quick, effective command methods, this new Captain had no idea what lay in front of him and a crew that would follow him to death itself should he require it. Kirk’s first 5 year mission into deep space. The Legend Begins…

Recently I was contacted by artist Jim Graham, asking me if I would attempt to create a composite using his Enterprise build. I happily accepted the challenge telling Jim I would do my best using the photos he had taken of his build. After viewing his photos again, I searched around my database and found a scene from Star Trek III that would work for the vision I was going to try to create. After placing Jim’s Enterprise into the shot, and attempt to get the shadow correct, I noticed it was very empty of activity. I always believed that a Starbase would have much activity in and around it most of the time, so I began to think of what other artists had fantastic artwork elements that would work in the scene. I came across quite a few… and utilized those of Jim Graham (obviously), Tony Cardona, Douglas Graves, Tobias Richter, The FX Company, and finally elements of Paramount’s 2009 Star Trek film. While I am pleased with the way the scene turned out, I am still learning better technique of how to deal with smooth hulled models (like the Enterprise) as used in this composite. I still have much to learn. In any case… I hope Jim, and all of you, enjoy this creation.

To view, or contact any of the artists mentioned above,

please simply click on their names in the paragraph above.