I recently was able to add this fantastic artist to the list of the great artist shown here…. and this piece is a serious reason why! James Small…. professional modeler in every means of the term has produced this amazing studio scale replica of the Ultra Probe as seen in the 1970’s series SPACE 1999!

View the photos below the commentary…

Here is what James has to say regarding this great replica…

This model of the Ultra Probeship from the Space:1999 episode “Dragon’s Domain” was  completely scratch built and finished for a customer in Britain, and it is the first replica of the ship at this size which I have built. The model measures a little over five feet long at 1/48th scale and is the same size and proportion of the largest of the complete original models of the ship used by the special effects crew. This model was originally built strictly for myself when I lived in Brandon, Manitoba, but I was persuaded to finish and sell it off, as I don’t have enough room in this new Nova Scotia location to display it properly. It’s the single largest model I have ever built, so I actually hate to part with it, but ya gotta put bread an’ butter on the table too.

Here’s a little history and explanation for those interested…

In reality, three models of the Ultra Probe were built for the episode by Martin Bower. One was built at about 2-1/2 feet in length, which is about 1/96th scale (it’s the one you see docking with the alien ship) and one at five feet in length, done to the scale of 1/48. This large model was only used for a few “fly by” shots. The third model was actually only a partial model of the nose cone and front body section and was built to the scale of 1/24th. This is the model you see when the command module detaches from the main body.

The original studio models were built in a tremendous rush by Bower and therefore were understandably crude compared to what one would expect in a display model. Also, the detailing varied considerably between the different sizes. Therefore it would have, for example, been pointless to exactly copy all the “kit bashing” used, since the detailing varied so much between the scales. The original models, although they looked great for the few seconds you see them on film and harshly lit were, in all honesty, not terribly desirable in the context of a display model.  Even some “key” proportions varied between the three original models, so it’s arguably open to a lot of interpretation which way is correct to build a strictly accurate replica.

Many people propose that, usually correctly, that the only way to build an accurate replica of a studio model is to copy the exact size, shape and detailing of the size of model you’re replicating. I usually agree with that philosophy, but in this particular case of the Ultra Probe, I decided that some artistic interpretation was in order. I wanted to make a model of the SHIP, not a specific studio model per se. So I deliberately took great liberties with the kit bashing, but did maintain exact overall shape and proportions when possible. Other improvements were made over the originals, such as more realistic turned aluminum engine bells (on the tail and the command module) instead of silver painted plastic parts which were used on the originals.

The detachable nosecone “lifeboat” was actually mastered and cast in fiberglass by master SFX model maker, good friend and Space 1999 miniature expert Chris Trice who also lives in the UK. He made the nosecone’s main body, I made the swing-away docking arms and their working hinge points. There are many “illegal” and incorrectly modified copies of Chris’s work floating around out there, but this one is made from one of his original castings. He made it based on, but to a much higher standard than, the the like-scaled original which he once had access to.

The turned aluminum engine bells populating the model were made to my specifications by Mike Reader, a friend of mine in Manitoba, who has been satisfying customers worldwide with his beautiful machined products. He’s made hundreds of engine bells for many people’s spaceship models! Mike is also a model maker as well as a professional machinist, so he really knows how to make machined model parts! (Mike can be reached at reader@mts.net.) 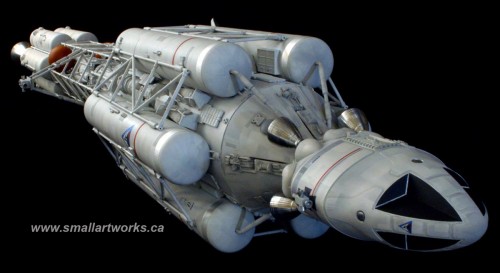 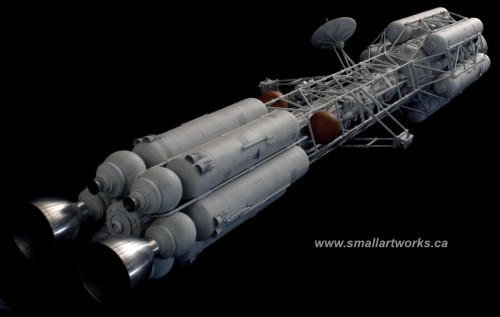 Next up from E. James Small is his actual build of this beautiful replica!