Ever since I viewed Jim Grahams build of the Leif Ericson, (SEEN HERE from the old AMT kit), I had wondered how it could be used in a composite. I was going to copy the old box art from the kit at first, but then I thought of trying something else. I began to search the internet for any scene this model may have been in. I found very little on the subject. When AMT released this kit in 1968 as their own line of Starship model (as they had been successful with the Star Trek line), they were  hit hard with small sales of the subject. I remember getting one, building it, and even playing with it. But it was nothing like Star Trek. The Ericson was even designed by Matt Jeffries… who design the Starship Enterprise. So, based on the premise that the Ericson was supposed to be from the Strategic Space Command, I pictured a fleet of ships, ready for exploration and defensive battle… like the Federation Starships of Star Trek.  So here is my vision of the SSC in a battle with an unknown enemy.

Using a screen grab of the “Briar Patch” as seen in Star Trek Insurrection, then placing in a number of different debris fields, explosions and rocket flare throughout…. there is even an actual Federation Starship in the scene…. I was able to create this battle scene. One of the aspects I very much need to learn is working with a model that has a smooth hull…. like the Ericson does. There are no panel lines to make it look real, or even larger than the model itself. I may come back to this someday when I learn how to create a paneled grid on the Ericson’s hull for realism. I did manage to create deck wreckage in the fireball (with the flame glow on the hull)on the closest ship as well as burn patterns and burning damaged areas… and even a plasma leak from the second ship, but the smooth hull is what still attracts my eye for some reason. That stated… I shall endeavor to learn… and do better for the next one. I hope you enjoy it? 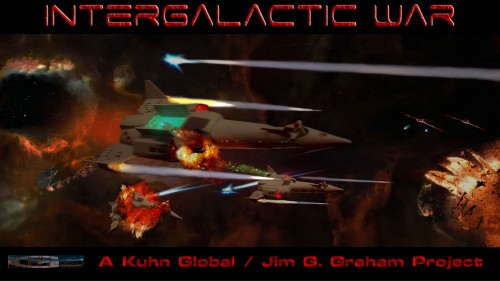