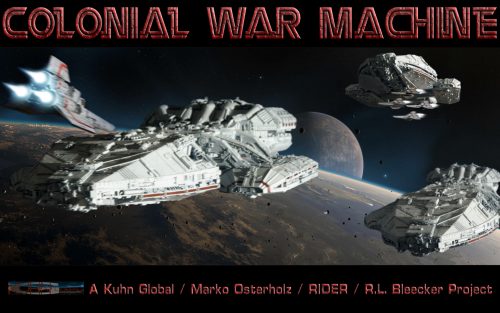 I was combing through the site recently, coming upon this oldie, but goody from 1/1/2011… and I decided to bump it to the front page.
Kurt Kuhn

The Colonial War Machine was stronger than ever, holding off decades of Cylon attacks and protecting it’s twelve Colonies. During an intense Cruise along the outer rim of claimed Cylon Space, a fleet of three Battlestars are suspiciously called home. They had been ramming heads with 12 different Cylon Basestars for the past 3 months. Even though they had dealt the Cylons extreme damage to most of those Basestars, and destroying at least three of them, they suddenly found themselves staring at only debris fields remaining upon the shift of the new day. The Cylons had pulled away, VANISHED!, going back into their claimed space. The Commander felt rather uneasy about this as just yesterday they were neck deep in a nuclear exchange with at least three of those Basestars… and now they were gone?! And what is with the sudden word of peace?! “The Cylons don’t talk peace. And they certainly don’t take prisoners! Yet they want peace?!” The Commander thought aloud. “Something Stinks!” he again bellows louder than his simple commentary would have. “Helm!… Take us Home… light speed.” he frustratingly stated…. and continuing toward his first officer…”and keep us on ALERT status. I am going to get cleaned up. As soon as we reach the main Fleet, send out a patrol to check the area. Send my son Apollo… and have him take Starbuck with him.”… Ty looks toward his old friend…. “Aye sir.”

Using the photos of the amazing Marko Osterholz Battlestar that is FOR SALE currently (See Photos HERE), plus using artist RIDER’s Composite renders of the studio scale Vipers builds by R.L. Bleecker, and some high resolution, internet found backdrops… I was able to create this scene. There is a Viper returning, 4 Vipers on patrol, and two more launching into the sun (which called for sizable shadows behind them). 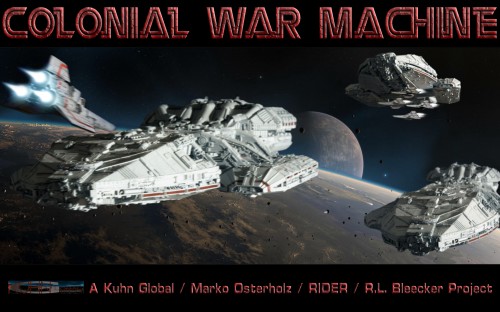