As you viewed with his completed “Ultra Probe” we showed on this Gallery last week, here is a little bit on how that fantastic creation came to be as well as a little more information by, and about Master Artist E. James Small….

I started this model many years ago, intending it to be my own. I’d made a special display place for it on top of a divider wall in our home in Brandon where it would be displayed prominently and not be in the way of anything else. However, we ended up moving to Nova Scotia in 2007, and this new home is so much smaller there is no good place to display it as intended.

The model’s basic shape is made almost exclusively of the very expensive EMA/Plastruct materials and random kitbashing. The main six spine longerons are made from solid stainless steel rod for added strength and to keep them straight. Even when you watch the episode on TV, you can see that the plastic spine on the original is far from perfectly straight so I wanted to fix that!

The front body cone was carved from laminated MDF and detailed with kit parts. A mold was made from that sculpt and a foam filled (for strength and to prevent warping over time) hand rotocast urethane resin copy was made for the final model. I figured I’d cast it in case I ever wanted to make another model. That would save some work! Brass tube inserts were glued into the back of the nosecone lifeboat and the front body cone to allow solid brass rods to pin the two sections together, allowing the nosecone to be removed. The model was sprayed overall white and was stored for years! Finally, a few months ago, an individual in the UK expressed interest in it, along with a smaller version of the ship as well, so I sold the model and finished it by doing all the detail painting and weathering etc. 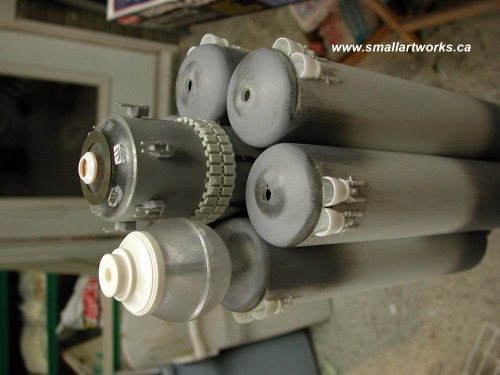 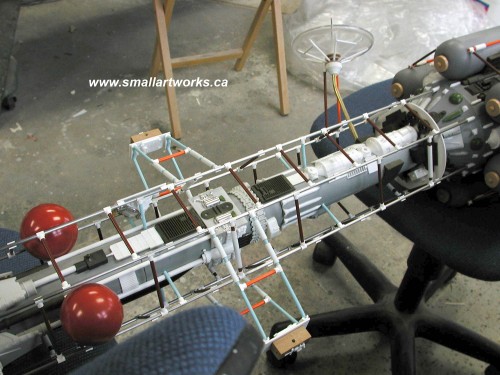 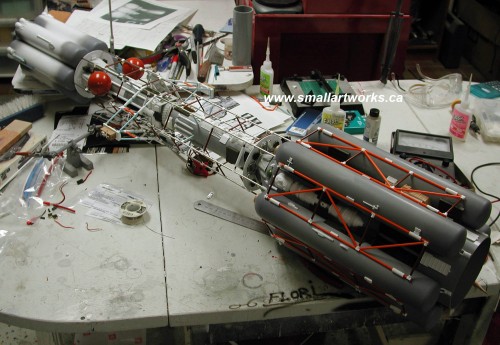 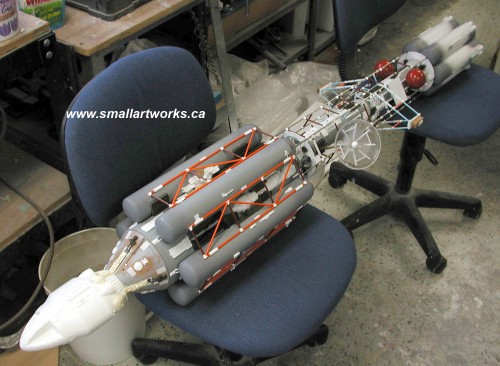 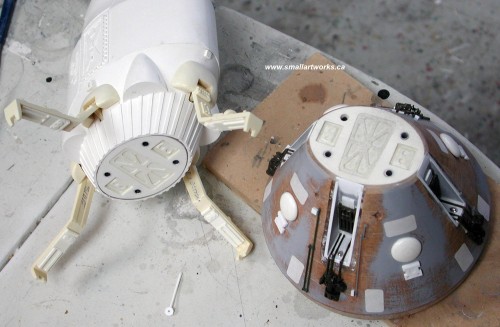 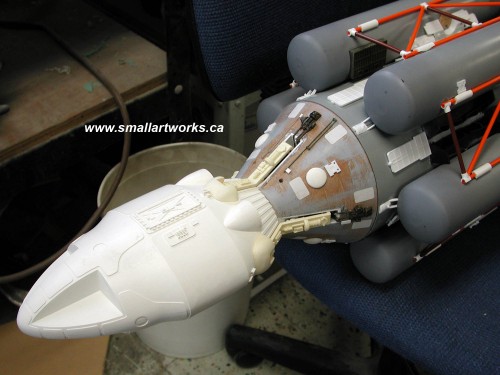 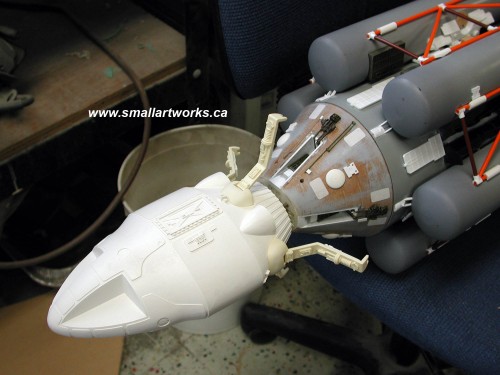 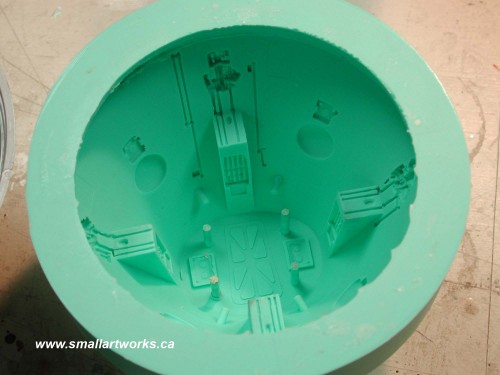 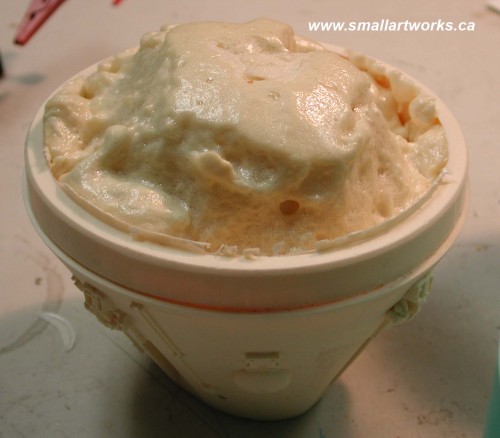 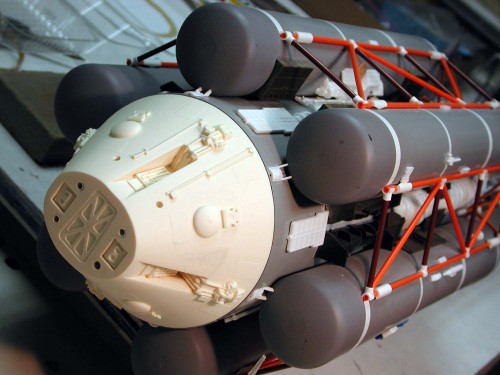 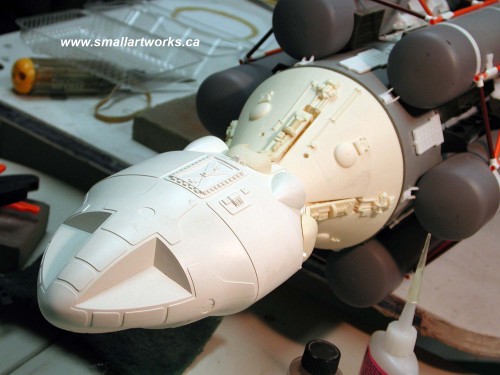 Here is one more pic showing me and the probe (among other models, both finished and unfinished) when I lived in Manitoba. I miss that shop! The pic was self-taken to use in a local newspaper article in the city of Brandon just before we moved to Nova Scotia. 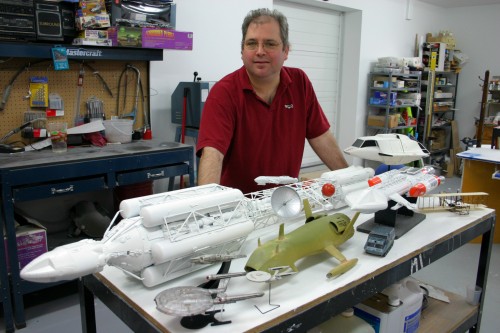 The tan colored model in the foreground, incidentally, is the “Mantis” a rarely seen model originally designed and built for Buck Rogers but the show was cancelled before it was used, although a small photo cutout of it was apparently used briefly in a quick shot of the hangar inside the ship (Cinaloa?) that eventually became the Searcher. I worked on it for Gary Cannavo, the owner of the “Battlebuck” web site, the fixed and finished model can be viewed there. It was badly damaged and needed to be repaired. It has a full armature for filming and engine lights and so on. It’s shown here before the paint work was done on the repaired areas.

Also shown is a studio scale V ship taken directly from a casting of an original (I have a bunch of kits of those for sale if anyone’s interested… comes complete with landing gear as shown on my site.) and also, behind the Mantis, a studio scale Space 1999 Hawk model which I also make available as a kit. Shown unfinished in the pic. I’ve made a few of those for customers around the world. A tinier Hawk is shown behind the Ultraprobe. Again, in unfinished condition.

Just for fun to show, I threw in a few little kits I’d built years before. The Wright Flyer I built in a single evening from the Monogram kit. The Enterprise NX-01 is the model you now see on the back of the box cover of the small kit that Round 2 (Polar Lights) re-released.

Thank you for looking!