This once “war torn” Earth is now a paradise again…. only to be forcibly run by the corrupt & ruthless Strahl Democratic Republic (SDR). The Galactic Federation had no right to proclaim the SDR as the ruling body to the Colonists of Earth… and now they would regret it. The brutal work camps alone were enough for the Colonists to create their own Governing body and rebel for freedom… The Earth Independent Provisional Government for which this new Military was risen… The Independent Mercenary Army! The will of the people, along with their strong walking tanks would fight to the death! “And death is what they received” thinks the Armored Sergeant as he passes behind one of those walking tanks just after his unit destroyed an SDR Bunker. Just then a burst of fire rings out from upon the ridge of the mountain they were at the base of. Immediately the soldiers went into action firing bursts of rounds toward their attacker. Then… laying waste to the entire mountain side… and the attacker himself…. the Lead Walking Tank let’s loose its Gatling Gun fire….. “like blasts from Hell itself!” again thinks the Sergeant. They would make the SDR pay dearly for it’s crimes on the Colonists!

Using the green screen photos of the Ma.K. Tanks that master artist Sean Brannin built, and using several different photos of soldiers (real and fake), firefights, and weapons I was able to create this scene as I saw it from SF3D/Ma.K.

To view these piece’s in it’s original size, please click directly on it… 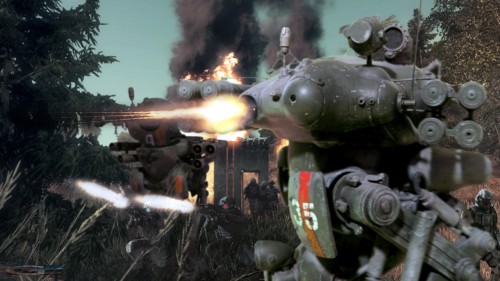 And in a War Correspondence Photo…. 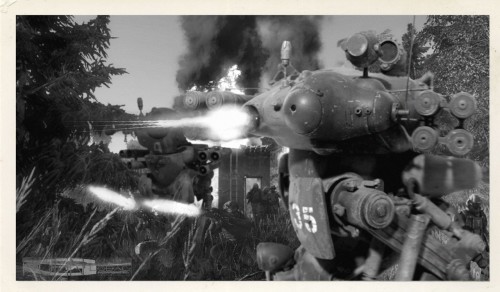