“… The Harder They Fall!” – Composite by Kurt Kuhn (Kuhn Global) 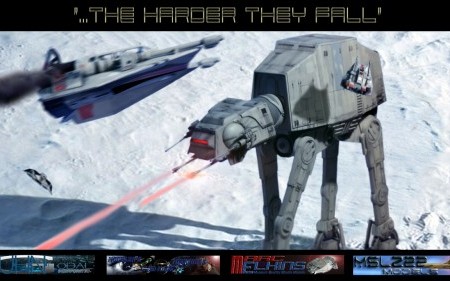 I was fixing the broken feature image links, and I thought I would bump this one from 2013.

Wow… it has been quite a while since I did one of these, and this is a piece I had promised I would do after the Mega AT-AT was built, but found little time to do so. However… I was restless the other night and finally made it happen! I apologize if it is noticed to be rushed…… after all… in my best typed Yoda…. human I am!

Utilizing the Blue Screen photos of  The Mega AT-AT and the 1:22 Snowspeeder (both of which were built by artist Marc Elkins for our Modeler Magic Display), then using a 720P screen capture or three from The Empire Strikes Back, I was able to make this new scene happen!

Finding the right screen capture was truly needed for this to come off looking as if it truly were a scene from ESB. There are several sites out there that provided some premium content for this sort of thing. I utilized two actual captures to make a blank snow canvas to work on. Then, finding the correct shots of the models used, with the right shadow effects on them…. the layering began. All Photoshop guys know what I mean. LOL. There are actually two layers of snow in the composite, along with a third that allowed me to show the massive AT-AT foot trails left behind the beast. So what you see is actually true to the original used in the film. A shadow was necessary for the huge beast, so I replicated one I viewed in another scene which actually came out quite well me thinks. Then I added the various angled Speeders to the scene for dramatic action, again adding a shadow for the Speeder flying up the side of the beast. The laser blasts I removed from an entirely different scene to preserve the unique color of the laser bolts, I then reshaped them to be what was needed for this shot, again adding another layer for the slight red glow caused by the laser bolts to reflectively bounce off the front of the AT-AT’s head. The foreground Speeder is clearly streaking by with motion blur, but was missing something. I remembered viewing a few FX shots of a Speeder trailing smoke…. so I added that smoke to be coming out of the starboard braking flap area that also housed the engine on that side. I made it extra black with fluff to represent a true oil burn. I really should have blurred the AT-AT more, adding slight noise to it to make it more scene realistic, but the actual model is so beautiful that I could not do it. OK then…I think I covered everything. I hope you like it! I see it as a David vs Goliath type of battle…. which prompted it’s title. The Bigger They Are… “The Harder They Fall!” 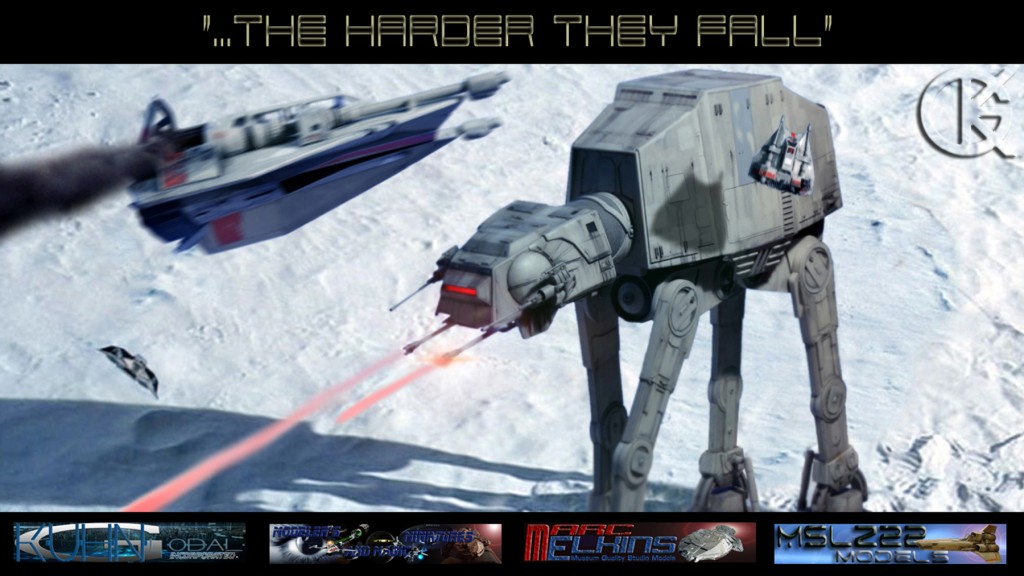 Click the photo above to get the larger version.