Kidnapped just a day ago… “or was it longer?” thinks the oldest of the eight boys who knew nothing about each other, he managed to get the rest of the boys situated in the cabin as he took the helm. One thing they all came to know is that they were different from the regular children… they each had fast reflexes, and some could even levitate things! “Was this why they were all kidnapped from their family’s” again thinks the oldest boy as he frantically attempts to start an old, very used shuttle. The Clone Troopers were already firing at the shuttle and he had to get them out of there quickly… then he noticed… they were going nowhere. With massive new Destroyers and Fighters laying in wait just outside their captor’s vessel, and the obvious tractor beam holding them, the best the boy could do was to just lift it off the docking bay floor. Fear crept into all the boys minds at the same time…. “would they ever see their families again” they all thought in unison. Suddenly something else crept into their thoughts…. with the name Palpatine screaming out. Their fate was sealed.

Using the photos of the fantastic Scratch & Bash build by Daniel Schaffer (SEEN HERE), and using elements from several different screen shots and photos, I was able to create this fictitious scene as I stated it.

To view this piece in it’s original size, please click directly on it…. 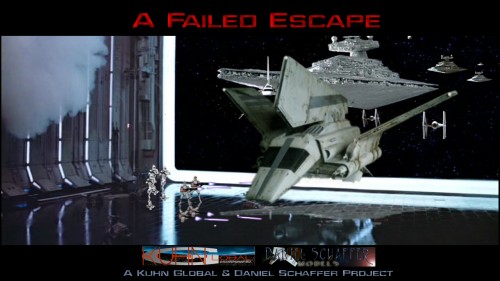