“There was! But not anymore!” – Composite Art by Kurt Kuhn (Kuhn Global)

Burning, adrift, and lifeless the U.S.S. Constellation lay in defeat and horror after being virtually spit out by the mammoth Planet Killer. Slowly approaching with her fore lights on the Constellation’s burning hull, her sister ship… The Enterprise attempts to communicate without success. Upon beaming a rescue and security detail over to the battered vessel, Captain Jim Kirk finds his old friend Commodore Decker, commander of the Constellation, hunched over a burnt out panel. Shaken… and insanely beaten… the Commodore describes his encounter with the Planet Killer “straight from Hell” he stated. As Kirk asked Decker what happened to his crew (as they were nowhere to be found)…. Decker explained he had issued an abandon ship alert and beamed them all down to the planet surface…staying behind as the Captain should. Kirk reacts in shock as he grabs Decker by the shoulders… as if to shake some sense into him… stating… “There is no planet!”….. a deadly silence is broken as Decker looks into Kirk’s eyes with his own,…. insane and tearing….. he states… “Don’t you think I know that?!…… There was!… But not anymore!”

Using the photos of the fantastic build from Barry Yoner (SEEN HERE) … and a few different screen captures… I was able to create this scene we all recognize.

To view this piece in it’s full size, please click directly on it… 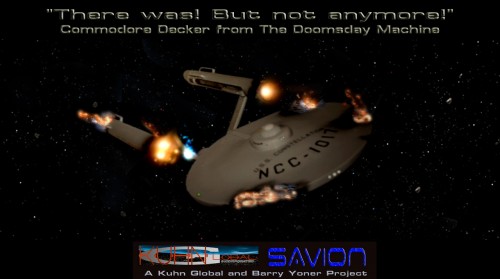