May 25,1977 was a day that changed many lives, not to mention industry standards. I remember sitting in the front row of my local theater in Los Angeles to view the stunning opening of the film…. STAR WARS! Crawling over me was the massive Star Destroyer we eventually came to know as the Devastator. Since that time, the Star Destroyer design has been one of legend. The studio model was surprisingly small at just over three feet, not to mention sparsely detailed for as much as we saw of it in the film. It looks HUGE as is the credit to the artists whom made the film. It was unlit aside from the rear engines and belly bay. When Lucas released the second film, The Empire Strikes Back, the Devastator had made such a grand entrance that Lucas and the model makers at ILM decided they wanted to have a much more detailed version that would be used heavily for that film. Thus the 8 foot Avenger was born! Obviously it became the standard to all who aspired the Star Destroyer design. For me…. it has always remained the Devastator that rocked my imagination. Over the years I had fully commissioned a few artists to build Devastator for me… at 3 feet.. and even an 8 foot version. Unfortunately neither ended up finishing, with much money lost.  When artist Randy Cooper released his 3 foot  Avenger kit, years ago now, I immediately called him and placed an order for three kits. What amazing kits these are by Randy! Thank you for creating them my friend. Anyway, to make a long story even longer, my trek continued. Two years ago, artist Marc Elkins decided to take one of the 3 foot Avenger kits and modify it to be a more detailed version of Devastator…. as if ILM had built Devastator at 8 feet like Avenger! Marc created an entirely new rear neck and bridge section, he made the appropriate guns for Devastator, and added the rear and top details that made Devastator so recognizable. Then installing 2,400 feet of fiber optic into the beast, at the correct thickness, the cityscape became real! Remembering that the original never had lit windows, this one would have to rival it’s sister ship, The Avenger….. and so it does! Drilling thousands of window holes into this model, Marc did not fill every drilled spot as we both agreed that some windows should be dark. Never-the-less, all that fiber was installed beautifully. The color is insignia white of course, but often shows grey on camera. I went ahead and did what I normally do in removing the stands, making the background a uniform blue screen for one-click removal for composite art. After all stated, I wouldn’t be surprised if Randy came out with a conversion kit for his Avenger kit after seeing this. It is truly a work of art by artist Marc Elkins. Thank you Marc! This one gets buried with me! LOL. Stay tuned for many, many composites of this. Even a few utilizing both the Blockade Runner kit and Star Destroyer kit that Randy produced. This is going to be FUN! Enjoy the photos! Composite posters are inevitable! 🙂 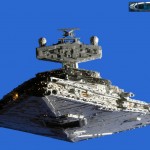 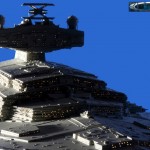 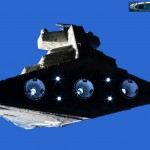 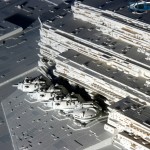 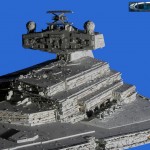 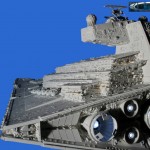 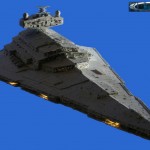 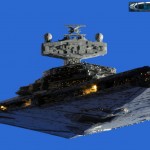 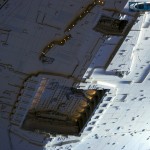 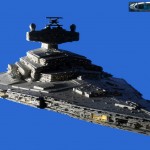 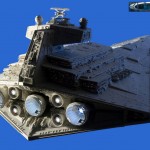 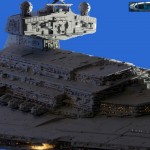 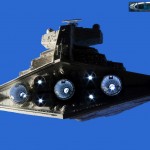 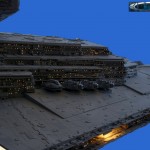 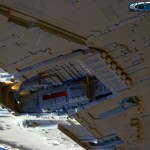 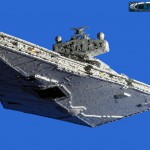 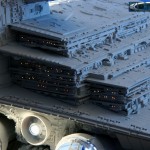 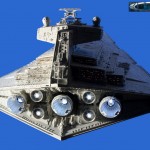 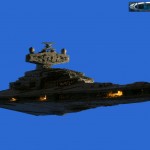 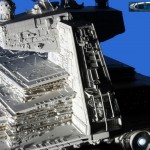 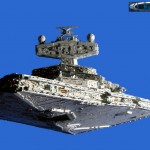 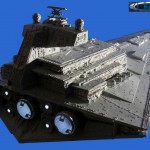 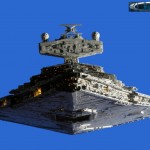 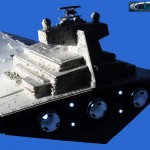