Here is what Jack has to tell of their SECOND release…

Here is the second Wallpaper. It’s the Repulse, one of the Sykon Navy
battleships in the movie. I started building the miniature almost 20 years
ago, later in 2004 when we had the model shop studio, we finished it with a
crew of 5 model builders. The model is almost 4 feet long and is build from
styrene and detailed with thousands of model-kit parts. It is lit with 2
small neon tubes and almost 200 feet of fiber optics.

By the way, regarding an old model builders tradition, I have added some
jokes onto the miniature…look close there is an anchor somewhere at the
bow.

Things are processing very good, the film will be soon available in Germany.
In 2 weeks we have a screening on a festival here. The international release
will be also soon ofter the German release. 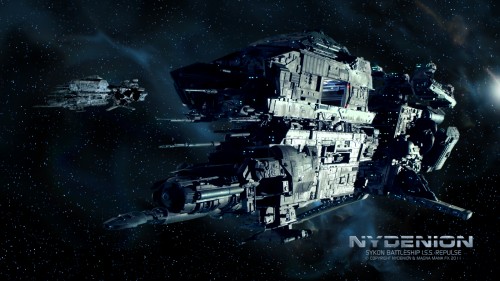