This fantastic retro scratch build started out as a small lamp! Talented modeler Steve Jurgens (known to many as Trekriffic) took his imagination to it’s boundaries of 1950’s science fiction design to create this beautiful, and tiny piece of artwork!

By the mid 1990’s, rocket technology had reached a level of unprecedented sophistication, allowing commercial spaceflight between the inner planets to become a reality. Sleek rocket ships plied the space ways between Earth and Mars ferrying excited passengers to and from the new Olympus Mons spaceport in comfort and style. Although such flights had become almost routine, there were the occasional equipment failures brought on by increased solar flare activity or unexpected meteor showers; sometimes the only thing standing between a ship and disaster was luck and the resourcefulness of it’s crew. There was also the danger posed by space pirates who selected targets seemingly at random; boarding liners to rob passengers of their valuables and ships of their cargo, even holding wealthier individuals hostage and demanding ransom ! Fearing that it was only a matter of time before a ship would be damaged so severely by piracy or astronomical events so as to make on board repairs impossible, the world’s commercial space lines (TWA and Pan Am chief among them) appealed to the United States Space Patrol (USSP) to develop a search and rescue vehicle able to launch within 5 minutes of a distress call and capable of arriving on scene in 15 minutes or less. Funding was approved and development fast-tracked in 1995 on the Mars Advanced Rapid Response Vehicle or MARRV.
One year later, the first successful space trials took place and soon a small fleet of sturdy, atomic powered MARRV’s stood ready to respond should the need arise. VTOL capable due to it’s twin swiveling wingtip rockets and equipped with a tail mounted laser cannon for use against pirates (or asteroids), the MARRV has been euphemistically dubbed “The Hummingbird” due to it’s unique ability, through a nozzle in its nose, to take on fuel (water) by inserting it in funnel-like “blossoms” extending from an orbiting refueling platform. 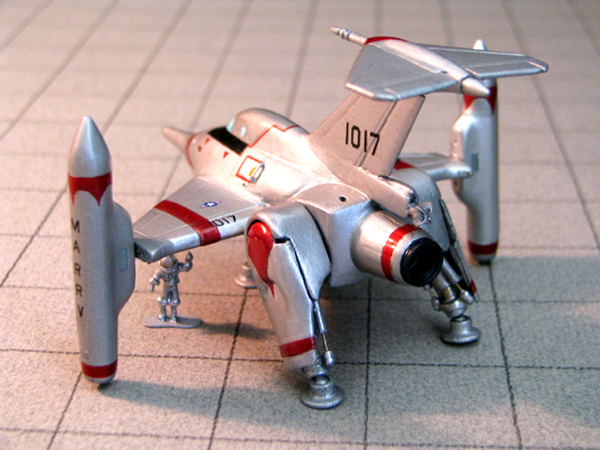 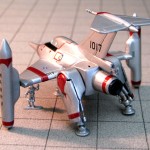 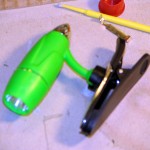 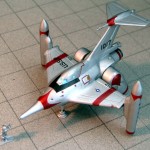 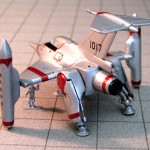 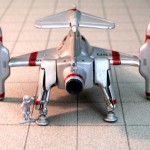 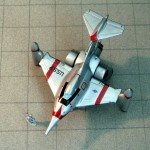 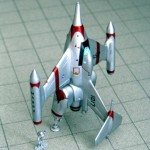 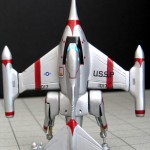 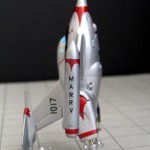 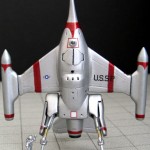 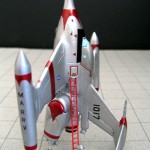 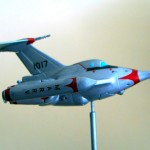 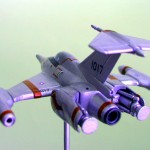 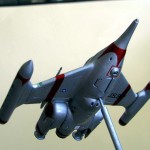 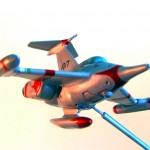 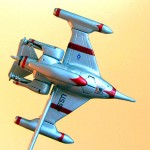