On October 18, 2019 I was visited by KORBANTH owner Randy Johnson. With him was a box that was about 20 to 24 inches in length that he handed to me, asking me to open it (with a huge smile on his face). As I held it, I noticed it had some very light weight to it, but not overly so. I guessed it was a new LightSaber, but did not know which. As I opened it, I saw a reddish tint in the box of two wonderful and strong aluminum tubes.. it was definitely a LightSaber with non of the electronic “guts” inside of it. Taking it out further, it was obvious it was a double LightSaber, and that it was inspired of Dark Rey’s from The Rise of Skywalker upcoming film. Immediately I wanted to see it work, with half of it rotating downward to create the dual blade (like Darth Maul wielded in Episode One). Holding it as a two, both sides are linked together with a strong pivot joint at the bottom (which becomes just slightly off the middle as the dual blade when opened as such). As the two, before the opening, there is a connection of a strong magnet holding the two sides together. It is impressive, and with a slight jolt of my hand, or even slight push with finger in the the hand holding the Saber, one half swings down and latches automatically with the quality pivot mechanism that is engineered into this piece. Fantastic! The red colors on the aluminum were a bit muted on this prototype, yet still look amazing, resembling what we have seen of the film’s trailers. This is truly a magnificent, and I feel like a kid holding this Saber. I am happy to report that I shall always be a kid playing with my toys! LOL. With that already known fact in the wind, I can also say that Korbanth continues to impress me with the quality they both show, and have sold to me. They continue to be top notch. Impressive, Most impressive. Hmmmm… where have I heard those words before? LOL. Sadly, you may have noticed the title showing this as a one-off prototype. I suspect it shall remain that way with recent developments in the Saber Community. I suspect that eFX may be making one of these Dark Rey Sabers to be for sale soon enough (per an eFX email suggestion that something they have not made in a while will again be made, but from Rish of Skywalker)! Time will tell, but if my speculation turns out to be a fact, I am willing to bet they shall be available before this years end.
Enjoy the photos! 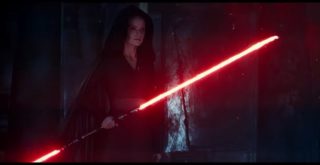 ABOVE: Dark Rey’s Saber Sequence in Rise of Skywalker 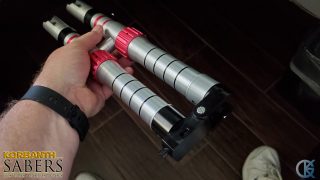 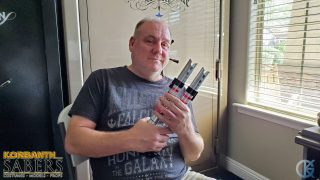 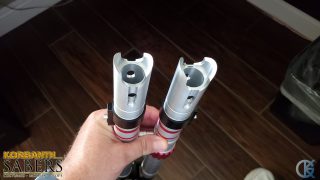 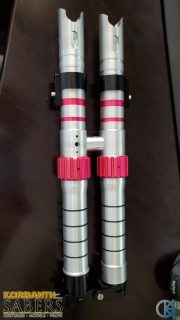 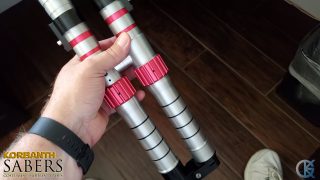 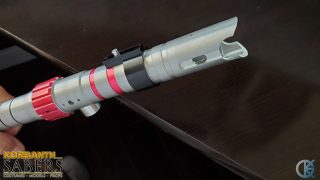 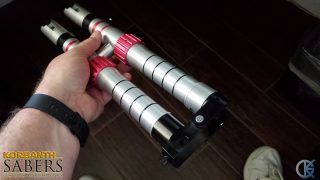