Racing down the Death Star trench, Darth Vader and his ever so confident TIE Fighter Wingmen have nothing to fear as they pick off the pathetic Rebel Scum Pilots, and their falling apart fighters from reaching their goal….. until now!!! THEY have now become the targets by Captain Han Solo speeding in from above!

Using the blue screen photos of the Lasse Henning Vader TIE build, and the NICE-N Model Designs Studio TIE that R.L. Bleecker built for the collection,… and an actual screen capture from the A New Hope Star Wars film, I was able to reproduce this excellent scene where arrogance becomes a deadly attribute. The scene itself with the exploding TIE and Laser is what WAS used from the film, while the Vader X-1 and the TIE on the viewer’s right are what replaced the filming models in this scene.

To view this piece in it’s full resolution, please just click on it… 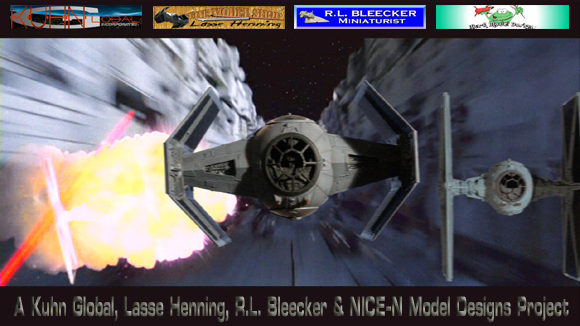 To contact Lasse Henning about THIS KIT, or his services, please click the banner link below… then tell him Modeler Magic sent you!