Entering the system where the planet Yavin existed was easy for the Captain of the Corellian Frieghter DILIGENCE…. it was not knowing where to go after that which puzzled him. Soon he would find out as a pair of old, beat-up Y-Wings flew closely next to the DILIGENCE soon after he entered the system from light speed. Identifying himself to the lead Y-Wing Pilot (Gold Leader), he is instructed to follow the Red Y-wing while being escorted to the Rebel Base with which he still had no idea where it was. “Looks like we are heading to the fourth moon.” he states to his co-pilot.

Using the fantastic DILIGENCE build of Stefan Hacker, the Blue Screen photos of the Nice-N Model Design Studio Y-Wings Gold Leader and Red Jammer), and utilizing part of a beautiful art render from Tobias Richter of The Light Works… I was able to create this imaginary scene.

To view this piece in it’s original size, please click directly on it… 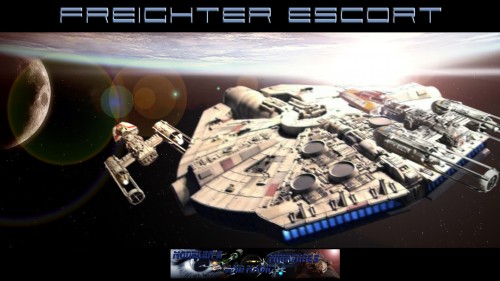