Slowly regaining his senses… as consciousness takes hold, the Master Jedi begins to hear again the blasts and crackling of the fire about him. Now fully coming around from getting knocked out by the pillar that collapsed on him after a laser bolt hit it, he realizes he is in great pain. Both his legs, and several ribs broken he hears the coming stomps of troops and machinery entering the Temple… as well as the heavy anti-grav engines from what he now saw to be a huge, new type of Destroyer hanging close to the ground a few miles from the Temple’s court. And yet… he felt no life as he attempted to visually scan the area for his fellow Jedi… only to find layers of bodies of people he grew to know as family over his years of training. Even the Younglings were not spared. Palpatine had truly succeeded in destroying what Jedi were on Coruscant, but this would not be the victory he so thought it would be…. as he has unleashed the unseen power of the Force… which would again someday cause the Sith to retreat into the darkness. “The people will not stand for your corruption Palpatine.” states the master Jedi under his breath as he wills the medi-chlorians to bind his broken bones for just a bit longer. Now talking normally (as if Palpatine were standing directly in front of him) “Your day may seem to be victorious in the innocent deaths and destruction you have caused, but it is not.” Spitting blood as he fights to stand again on his two feet…. he continues…now raising his voice a bit louder… “What you have unleashed is your own undoing……” taking in a deep breath “… and your own demise as seen in prophecy!” Knowing his time is near…. the master Jedi activates his light saber for the last time…..it’s green glow shimmering over the Temple floor…. “For the fallen….. for the Republic!” he shouts as he calls upon every ounce of energy he has to walk toward his destiny….. and peace.

Using the base art from the Lucas Arts game trailer “The Old Republic”, along with the outstanding photos of the professional Star Destroyer AVENGER build (owned by Tobias Richter and built by Tim Ketzer from the Randy Cooper kit)… as well as the blue screen photos of the fantastic R.L. Bleecker build of the Star Destroyer INTRACTIBLE, and finally the amazing CG Star Destroyer ALLEGIANCE model by Ansel Hsiao… along with many layers and cuts from other scenes from “The Old Republic”… I was able to create this scene.

This piece has much emotion for me as I believe it as what many of us may feel we face each day in today’s world of corruption and blind violence. It is my hope that we (the human race) may come together as one to defeat the corruption of the worlds aggressors and greed mongers in order to create a better society built on mutual understanding and forward thinking. Our survival depends on it in my humble opinion. Thank you for looking.

To view this piece in it’s original size, please click directly on it. 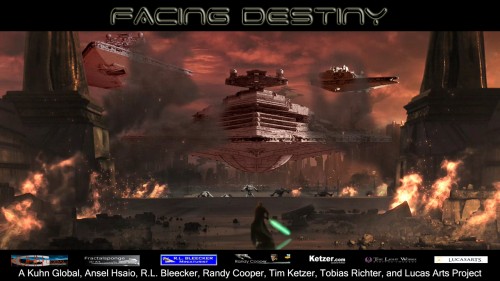