I wanted to share my latest model project with everyone. In actuality it’s the Fine Molds 1/72 scale Jango Fett kit which I built years ago. The photos of my original build of it as the Jango Fett Slave I are on the Modeler Magic site (CLICK HERE TO VIEW THEM). However I never did anything with it and it just kinda hung around collecting dust. I’d always wanted a Boba Fett version but couldn’t afford a second kit at the time. So a few months ago I decided to convert it to the Boba Fett version as seen in the original Film trilogy (#5). This wasn’t “The Mandalorian” inspired, as when I started this conversion, as I’d not seen any of that TV series yet. (I’ve since seen the error of my ways and have binge watched it all, lol). I used the Star Wars Chronicles “bible” and based it primarily on that.

So I completed the kit but didn’t want it hanging around collecting dust like its predecessor so I decided to build a presentation diorama for it. I decided on a circular platform as seen in Cloud City but didn’t want a straight up identical copy. I did want those circular lights though. I also added a sort of antenna array thingy, the tallest pole which has a red flashing warning beacon like you see on all tall towers. The outside diameter of the platform is 15 inches and the kit is 12 inches in length, so they’re not in scale to each other but hey ho, it works. The base is a piece of mahogany I cut and mounted a piece of toilet pipe from the local hardware store. Into this I added 5 orange LED’s. The platform mounted on top of this. The kit itself is connected via a 1/8″ jack and allows it to turn 360 degrees on its clear acrylic tube. It’ll still collect dust but the display now gives me incentive to regularly clean it. 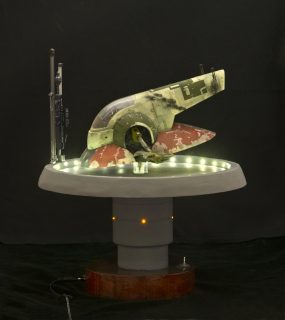 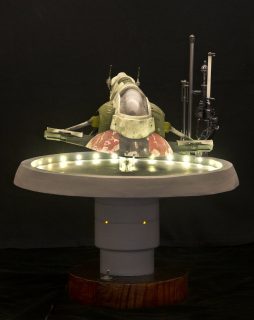 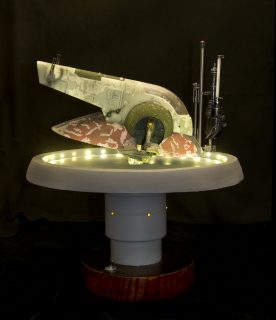 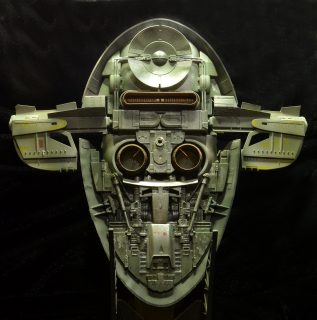 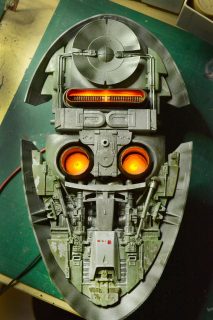