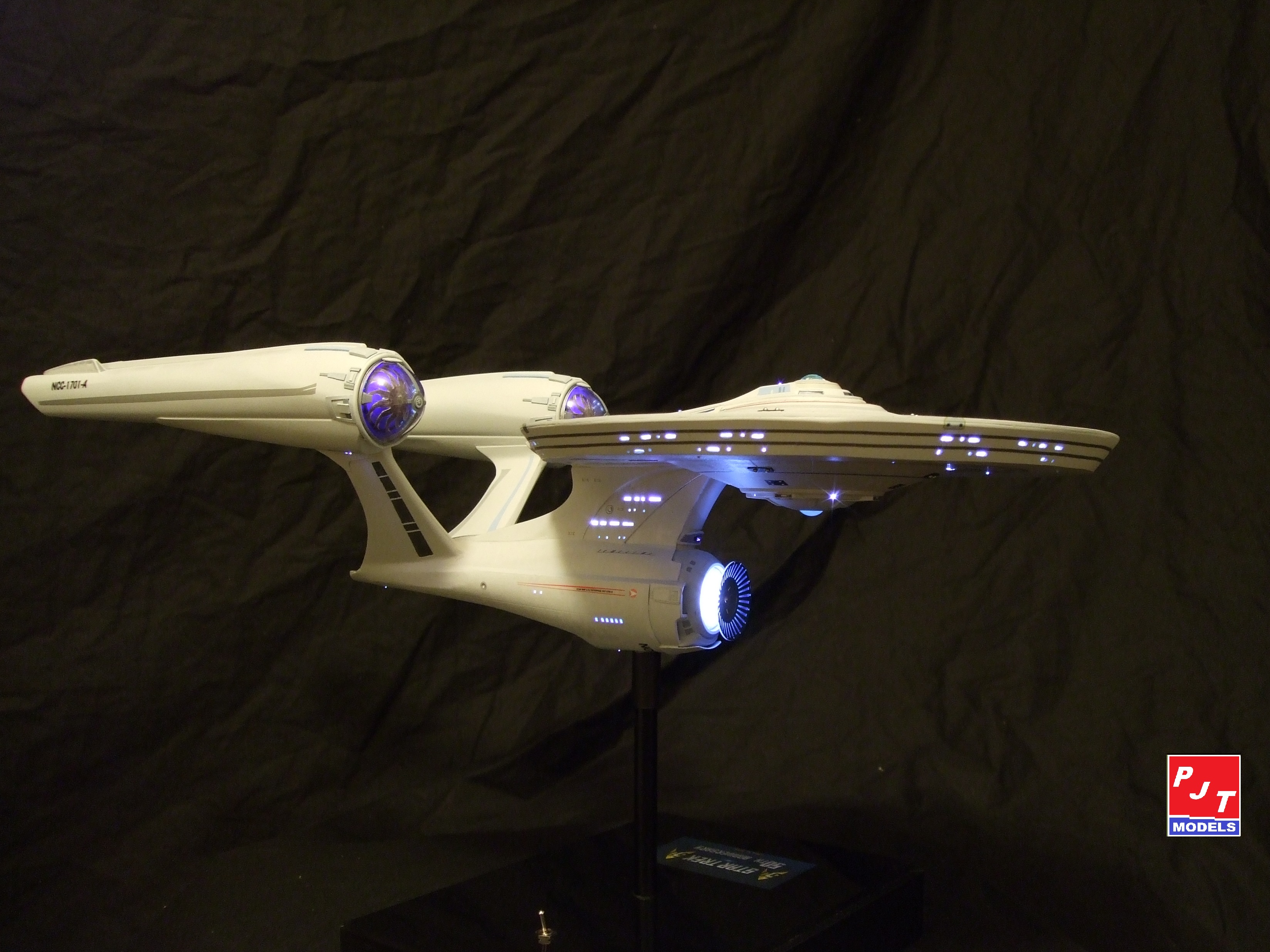 We welcome PJT Models to Modeler Magic with their showing of this fantastic makeover of the JJ Enterprise into the more ‘beefy’ 1701-A we saw at the end of Star Trek Beyond! To my knowledge,.. PJT is the first to do so! My question is… might their be a kit coming of this version? Excellent work to Paul Taylor of PJT Models! 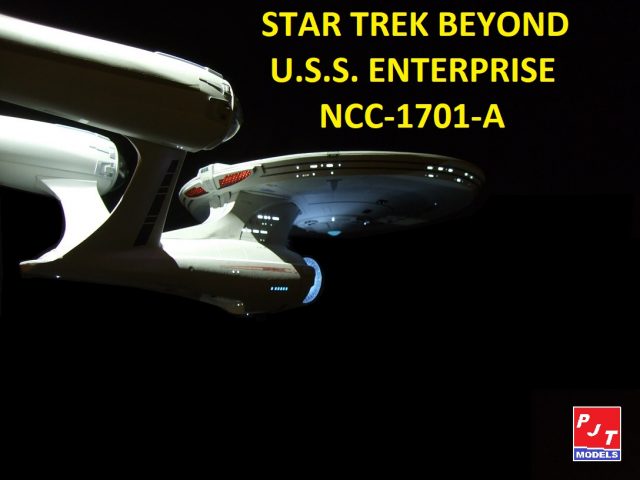 This is my built and lighted model of the new USS ENTERPRISE NCC-1701-A from Star Trek Beyond and is the only physical model in existence! That I know of, It took me about 3 months to complete and was very enjoyable, plus it is the only one in the WORLD!

My goal was to build this new ship but to make it more appealing “well to me anyway”, I took the original design concept art which was done by Sean Hargreaves and that which we saw in the film at the end when it was being built in star base Yorktown with the time lapse scene, I personally was very disappointed when I saw it for the first time on the big screen, the warp nacelles position was just awful like they were stuck on the very end of the nacelle struts, and they looked too similar in design to the USS FRANKLIN which was a lot older ship so it kind of gave it a sense of going backwards with technology, it was as though Starfleet went through the spares bin and found some old nacelles to stick on! Anyway enough of complaining, so I used my artistic licence to build the ship with alterations to make it better looking than what was on screen and Sean Hargreaves concept art which was just hideous from the side view “sorry Sean”, I ended up positioning the nacelles slightly more forward on the struts to give them a better sense of balance and a small overhang at the front ends, also I made the engineering section slightly more thinner looking as I thought it was a bit too chunky/fat looking, in the end I have built the new Enterprise-A that looks like what we saw in the film but with some of the previous Enterprise in it like from the 2009 and into darkness ship for example more sleek looking design, I did make the nacelles slightly bigger too compared to what was seen in the film again to give a cross over from the previous enterprise ship.

At the end of the day it comes down to personal preferences and I know from reading on different forums that there are a lot people who hate this version of the enterprise! I must admit that it has grown on me from when I first saw it, it is the Enterprise and will probably change from what we have seen to when Star Trek 4 eventually comes out.

Features are: Measures 21” long and is fully lit using LED’s running of 12v, and a custom made base that the model is able to rotate 360 degrees and easily detachable from the base, it also has a 50th Anniversary logo and a brass engraved plate to depict the NCC-1701-A, as you can see from the photos it is impressive, the warp engines have rotating/spinning bussard blades that are operated by a hidden magnetic reed switch from the underside of the engineering hull. 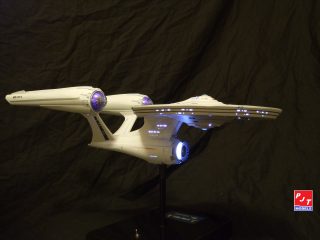 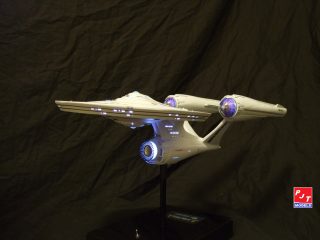 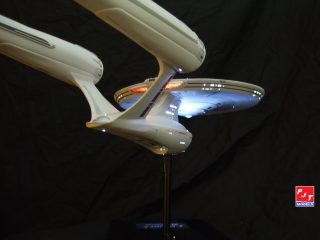 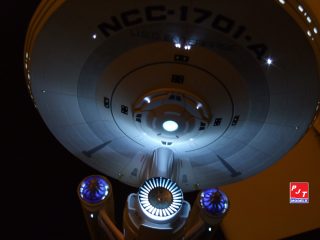 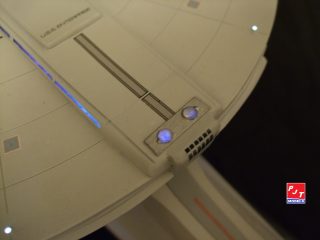 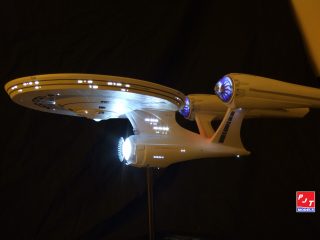 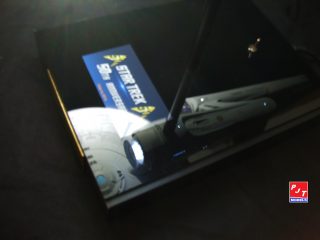 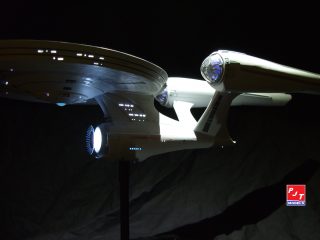 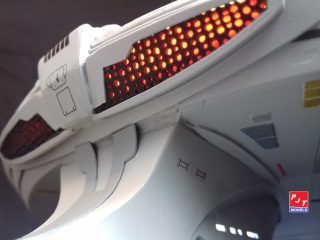 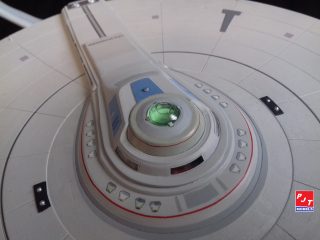 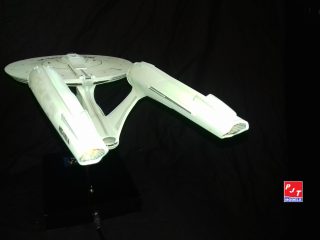 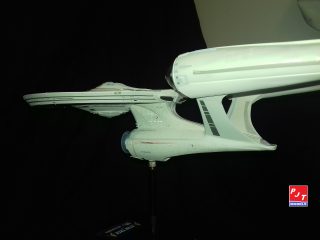 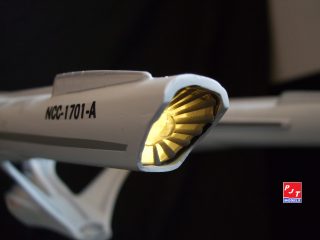 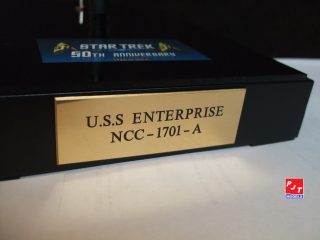 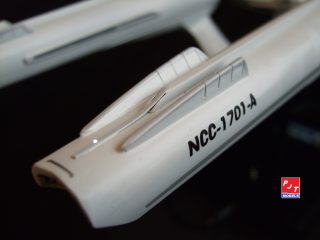 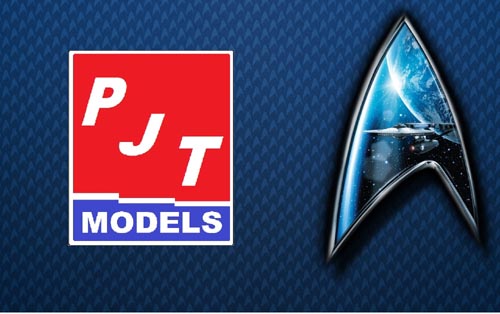