Tired and frustrated of being chased, Captain Solo knows he must end this stalemate quickly, or risk having his love (Princess Leia) captured, and possibly tortured once more! Desperate, and quite angry at his vessel’s inability to go to light speed, he makes a bold maneuver as the Captain of the Imperial Star Destroyer views from the command deck. “He’s moving into ATTACK position?!!” The Captain states as the forward guns under the command deck open fire! Nearly colliding with the bride section… the Imperial officers slowly stand after cowering at the bold move of Captain Solo. “Track them!” The Captain yells…. in response the radar officer responds.. “There is nothing on our screens… they’re gone!”

Using the amazing photos of the CessnaDriver build, the blue screen photos of the Studio MR Falcon (SEEN HERE), and a few screen captures from Star Wars – the Empire Strikes Back, I was able to create this alternate view of what happened during the exciting pursuit.. and it’s end.

To view this piece in it’s original size, please click directly on it… 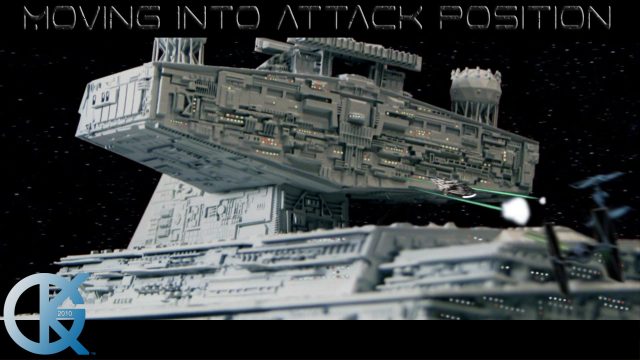