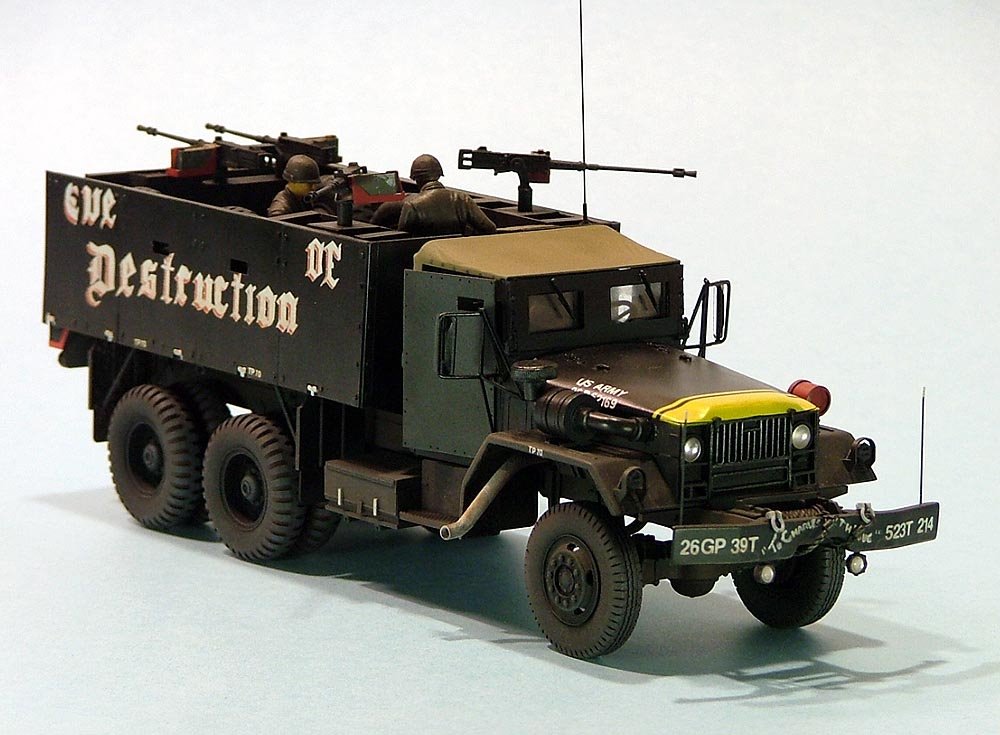 This piece was originally shown here on Modelers Miniatures & Magic back on January 24, 2009 and now updated to today’s showing standard!

Eve of Destruction is one of the best-known of the Vietnam era gun trucks – and she is the only one that was returned intact from Vietnam after the war. The others were scrapped or converted back to standard cargo trucks if still serviceable. Eve is on display at the US Army’s Transportation Museum in Fort Eustis, VA.

Eve was built on two 5-ton truck chassis, and is probably the most challenging because you can actually walk up to the truck and touch it. There are no M54 5-ton truck model kits in 1:35 (at least for the last 16 years I’ve been modeling them) scale for you to use in conversion efforts – so you’ve gotta do it yourself. And, lastly, the challenge is in accuracy. Not only do you have to model the M54 cargo truck properly, you then have to convert it to the gun truck accurately too. These trucks were modified by the truckers themselves – they have warts, bugaboos and errors that make them unique beyond their paint schemes – and when they went on Convoy Escort missions, they were beat to shit, and often had extensive repairs that changed their configurations.

For an Armor Modeler, this has to be the most challenging of all wheeled fighting vehicles to pull-off. There is a certain grace and beauty to a truck done right, I wish I could impress that upon modelers who just pay it a short glance and then move on. In 1996, I picked up commissions to build six miniatures of Eve, and I got completely burned-out on modeling gun trucks. I thought that would never happen. I certainly will not build six or more of anything else like that in the future. I haven’t touched a gun truck miniature waiting on my shelf since, but I am catching the bug again. I think this thread is a bit a therapy for me…

In the photos, Eve is finished-up in her 1971 configuration, with crew members for scale. It is an interesting gun truck, but typical and not the most extreme of examples. During RON (Remain Over Night) missions, the gun trucks were often battered and covered with dust, mud and muck. I choose to rarely model them like this because the popular armor modeling techniques are inaccurate for these vehicles, and they really look good after the crews returned to base and lavished attention upon them. My avatar, “Sopwith Camel” shows typical weathering for a vehicle during a RON mission, for comparison…

More photos show stages where dry-transfers and details are being brought onto the base model for completion. I do my own custom markings, either dry-transfers, water-slide or airbrush/stencil patterns because there hasn’t been any interest in doing markings like this up until last year. I’d like to think my website and exposure at Armorama in it’s early days might have helped kindle interest in the subject. It is really difficult to pull things together because they have to be finished in different sub assemblies and melded in the end. Thankfully, the later gun trucks like Eve had waxed finishes, and this helps when it comes to having to even things up.

There are two more photos of the outer walls of the Fighting Compartment painted – as this gun truck was a later design (tagged Second-Generation) I have to build the model with inner walls to be added during final finishing – you won’t be able to paint the truck properly if you don’t.

Bare naked plastic: the subsequent photos are of the major conversion parts in the raw. I design and cast my own resin parts to suit a particular vehicle and the most redundant things like radio sets and wheels. Armor Plate is simple sheet styrene because casting thin parts like this introduce a factor of warpage that I don’t want to entertain during construction. Little details like fixtures and fittings are added in different steps depending on access to sub assemblies and the flaws present in the real vehicle are modeled in this stage. I am particularly proud of Eve, because Veterans who have seen and crew-served the real vehicle in Vietnam have inspected my miniatures and found that I modeled all the flaws found in the real truck. IPMS judges (and I am one ) be damned – these things don’t get noticed in the proper context. I love modeling for Veterans, they have an entirely different perspective of a miniature like this. I can engineer mostly all of my parts to fit snugly enough together for repeated handling during the construction process – even the finicky tires, which always want to wobble off-line when a camera lens is pointed in their direction. Each truck I build, I figure out better ways of mating the parts in the dry-fit stages. I haven’t wrapped my mind around the concept of gluing everything together and then painting it – I can’t see it on a model miniature like this. Everything has to be able to be done in stages…

The are six photos showing the nitty-gritty of the gun truck conversion. I do conversions on both the AFV Club 2 1/2-ton Cargo Truck and Italeri 5-ton Cargo Truck model kits. I don’t have a preference with one over the other, but admit I like AFV Club’s parts and detail far more than Italeri’s. In modeling any wheeled AFV, I always start out with a grid sheet onto which I draw the truck’s critical measurements. This is the workbench that I build the model upon. It is critical for a 5-ton truck conversion because it has odd features that create a characteristic stance and if you don’t get it right, nothing else does on the miniature’s profile. A lot of gun truck conversions and miniatures fall short here. The M54 is a 11-12% scale-up of many of the sheet metal parts in the M35 2 1/2-ton cargo truck – the modelers make the mistake of thinking that you can use straight AFV Club parts for the conversion, unfortunately. Real Model, out of Europe, retails an incredibly expensive resin truck now – but the designer is an arrogant ass and can’t accept the fact that he’s made the same mistakes in basic research and design. $200 dollars plus is a whole lot of jack to spend on a resin kit that is inaccurate right out the gate…

Then there are miscellaneous photos of the truck components painted and coming together. A typical Second-Generation Fighting Compartment in grafted into the standard model kit cargo bed and wheels and items are put into place to double-check proper positioning and details. 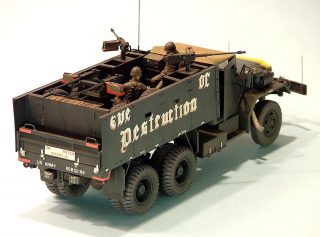 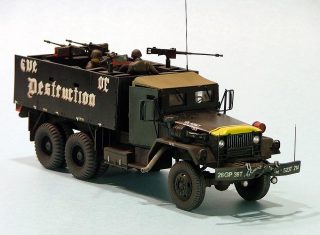 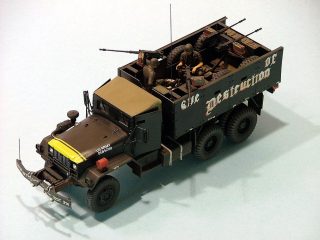 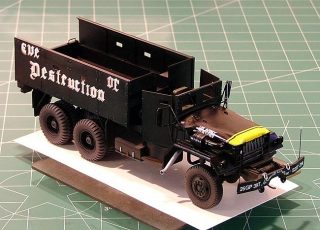 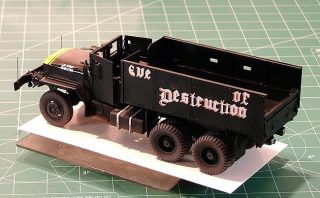 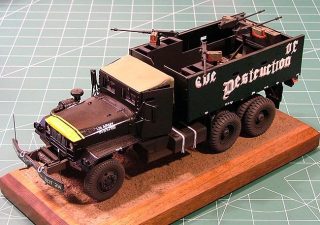 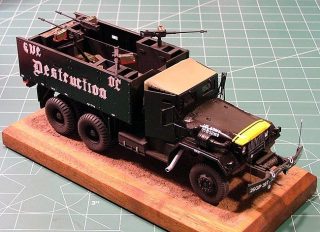 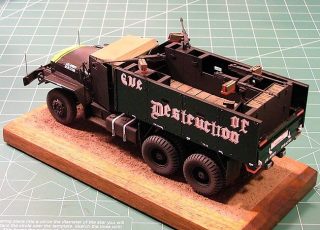 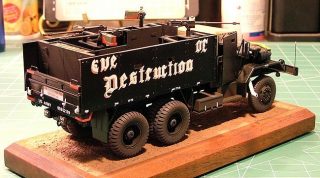 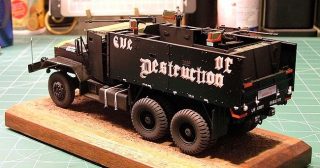 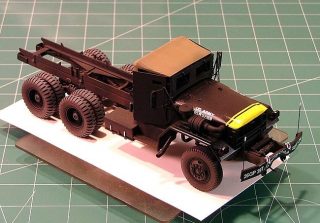 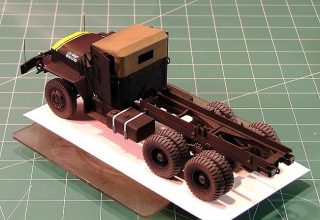 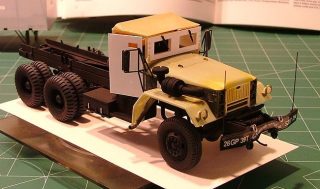 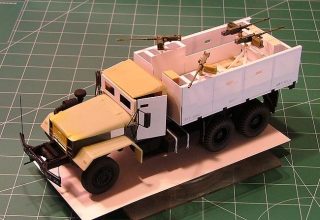 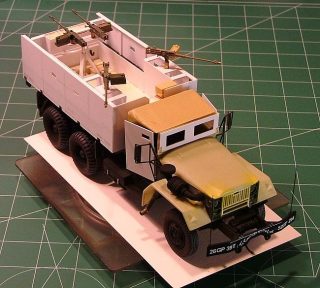 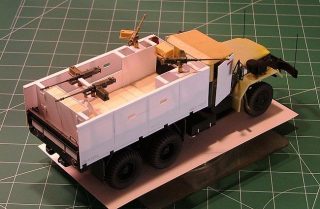 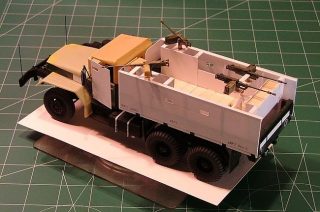 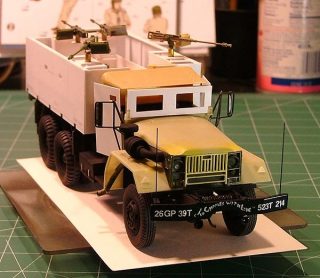 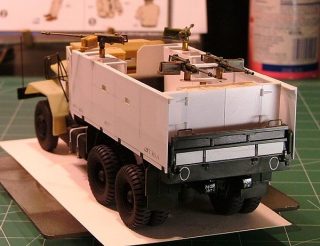 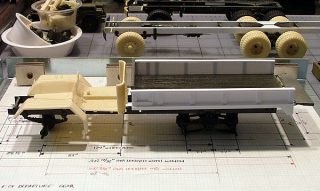 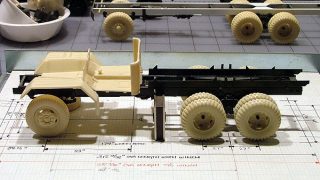 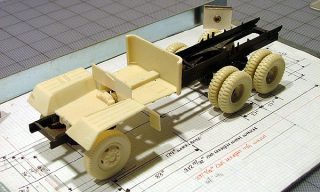 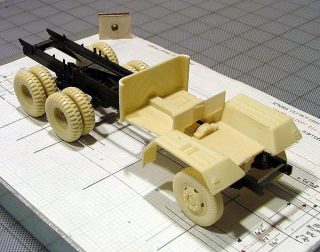 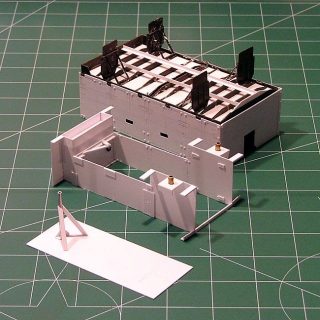 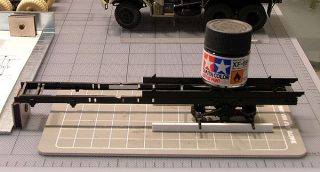 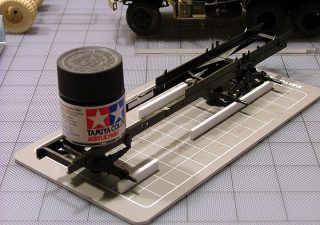 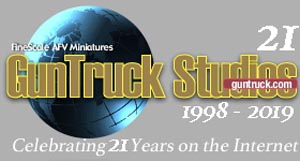 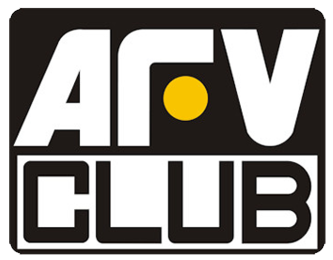 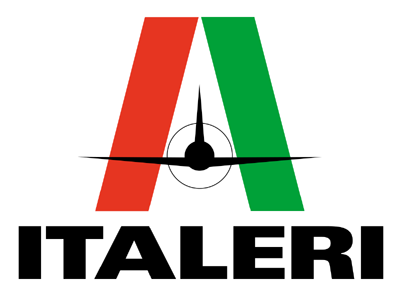