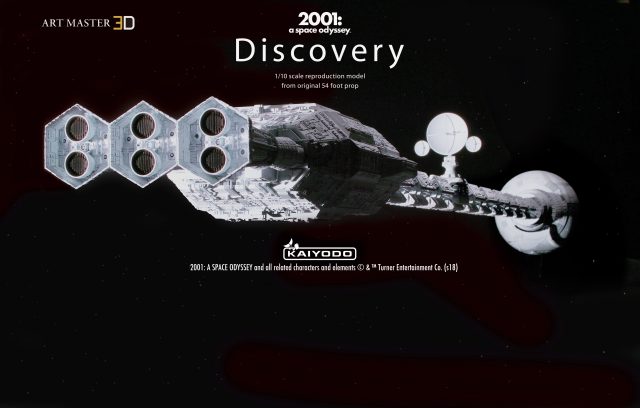 The most precise and largest scale commercial reproduction of the original movie prop ever produced.

The “Art 3D Master” 2001: A Space Odyssey – Discovery, is the latest product in a line of high-end collectibles by Japanese figure maker, KAIYODO.

This is a precise replica of the movie prop used in filming, at 1/10 scale, 64 inches long. The entire ship has been recreated based on sketches and blueprints, from numerous researchers, among them Adam Johnson, author of “2001: The Lost Science.”

The length of the original movie prop was intended to be 57 feet. However, it is said that the size was re scaled to 54 feet due to factors that arose during filming.
There remains much debate as to the exact size of the prop that was used, as well as the length of the Discovery represented in the movie, ranging from 100 to 150 meters.
For this project the most commonly recognized size of 54 feet has been used to scale the 1/10 scale prop reproduction.

Since the days of analog model construction, technology has progressed greatly. 3D and digital technology have improved in recent years allowing for greater accuracy and higher resolution in recreating detail at scale.
There is a risk of losing the authentic feel of analog prop construction when using digital techniques. In this production, digital tools were used effectively, with great care given to capturing the analog feeling of the original prop used in filming.

The goal of the “Art 3D Master” series is merging the most up-to-date digital techniques with traditional modeling.
Over 300 hand drawn sketches by researcher, and the Director of production for this project, Katsuya Nishizaka, were used based on many years of his private research. Sketches were converted to 3D, by veteran KAIYODO creator, Tetsuro Kato, and his production company, STUDIO Ren.
Much advice and insight where provided by other researchers, most notably, Adam Johnson, to create the most accurate replica of the 54-foot miniature ever created. 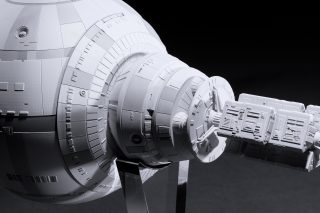 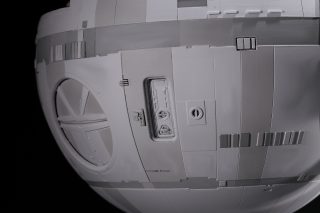 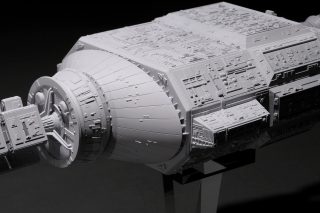 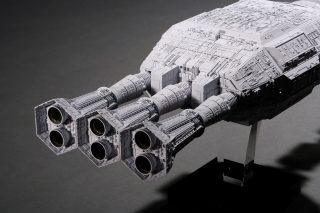 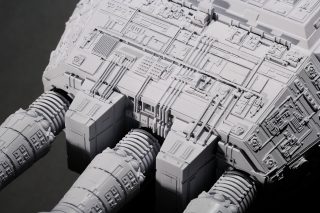 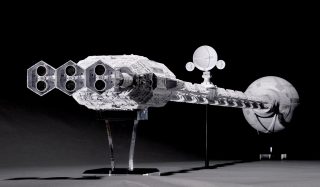 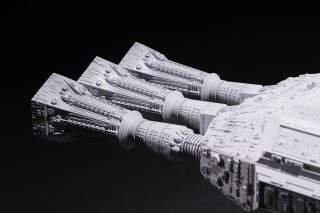 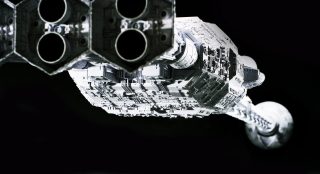 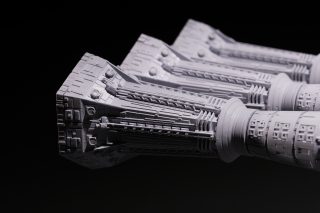 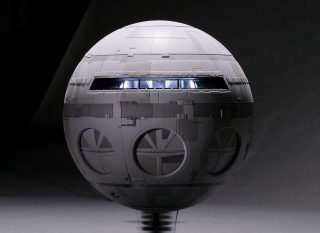 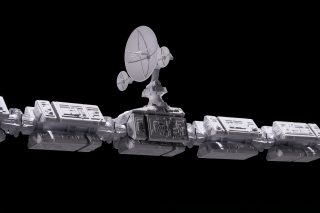 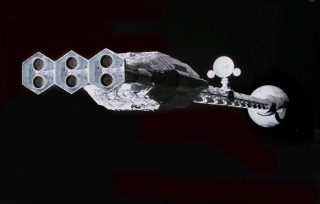 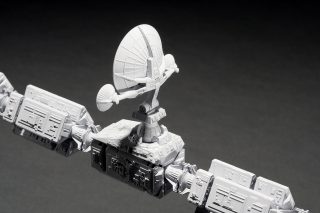 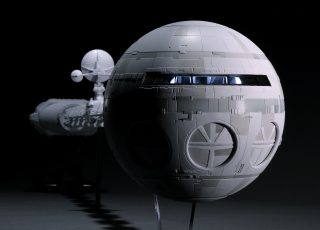 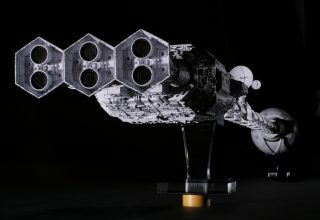 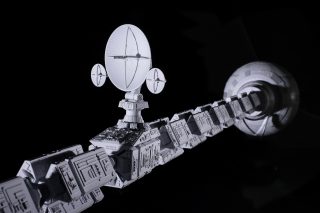 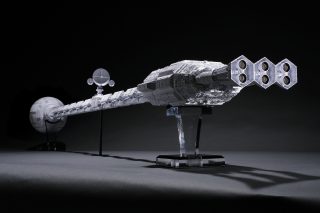 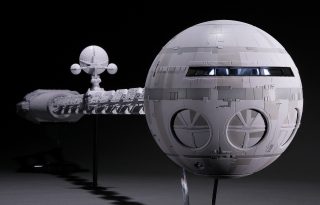 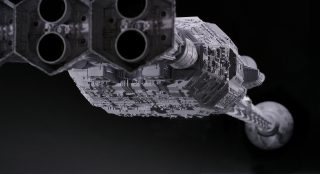 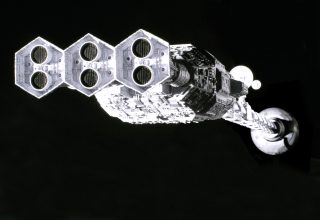 ABOUT THE PRODUCTION TEAM

Katsuya Nishizaka -Director of Production
Unlike other replica projects where there is an original prototype that can be used as reference, most of the props from 2001: A Space Odyssey where destroyed after filming.
To overcome the challenge of finding accurate reference material, Katsuya Nishizaka spent many years on in-depth research.
Due to the fact that much of the port side of the ship is not shown in the movie scenes, much of the detail from this side is based on conjecture. In the pursuit of making it as accurate as possible, numerous conversations with other researchers from around the globe, advice from Adam Johnson, author of, “2001: The Lost Science,” as well as acquiring high quality metal photographs from Piers Bizony, the author of “Making of Stanley Kubrick’s 2001: A Space Odyssey,” were used to recreate the most accurate reproduction possible.

Studio Ren (Tetsuro Kato) -Prototype and Development Director
All of Studio Ren’s personnel, in addition to the respected creator, Yasuyuki Kobayashi, and a number of college interns spent over a year exclusively on this project.
This collective of passionate creators proceeded with a single goal: creating the highest quality Discovery replica to date. It was more than eight months into the project before that goal was finally in sight.

Yasuyuki Kobayashi – Prototype and Development
Perfecting some of the complex, curved shapes of the Discovery called for the expertise of Yasuyiki Kobayashi. Kobayashi’s supervision on the challenging curved lines of the parabolic antenna, and heat dissipation fins brought everything together.

Adam Johnson – Advisor
Researcher and author of “2001: The Lost Science,” Adam Johnson’s advice brought true authenticity to the project. His advice and inspections throughout the production process enabled the highest level of accuracy to be achieved in the final version of the Discovery.

Piers Bizony
As a science journalist, space historian and author of, “2001: Filming the Future,” Bizony’s authoritative insights and research were invaluable.

Fredrick Ordway III
The blueprints of the chief technical consultant and scientific adviser for 2001: A Space Odyssey, Fredrick Ordway III, were used, recognized as the most accurate diagrams that still exist.

Characteristics of the 54 Feet Prop

The Discovery can be divided into three main components. The spherical shaped command module, the massive nuclear engines, and the long slender spine of the ship.

The Command Module
11 meters in diameter, the spherical command module holds the cockpit, three EVA pods, has centrifugal artificial gravity, and is where the HAL 9000 brain room is located.
The prop was 6 feet in diameter and fabricated from wood and fiberglass. Additionally, metal plates, acrylic panels, paper and paint were used to create various shades and create detail.

The Spine Module
There are a total of eleven container blocks for storing supplies lining the length of the ship, connected to the spine with couplers. The containers come in five sizes, with a total of sixty unique containers spanning the length of the ship. Each container has eight sides, of which five of the sides are also unique.
The prop containers were made from wood. The exteriors were covered in acrylic panels, and model kit components where used to create the details. The couplers of the prop were molded from aluminum.

The Nuclear engines
Heat from nuclear reaction was used to heat liquid hydrogen and create propulsion from the rocket engines. The concept was based off of actual research that took place during the Cold War, though it was never fully developed.
The rocket modules of the prop spanned four meters. There is a single photo that still exists of the production of the actual prop engines. The details of the piping, heat dissipation fins, and fuel tanks were created using plastic model parts made by Airfix, Renwal, and Faller models.

The Alfa Echo (AE) 35 Antenna
A large parabolic antenna was used for communications with earth.
In the movie, HAL 9000 uses the malfunction of this antenna to draw the crew outside the ship in an attempt to eliminate them.
There is no existing material left regarding the construction method of the original prop. Images from the movie were used to recreate the details of the antenna.

The mystery of the actual length of the Discovery
There are many theories as to the length the actual Discovery ship represented in the movie. In his book, “2001: The Lost Science”, Adam Johnson points to the MGM official blueprints showing the ship to be 496 feet (151 meters). The Discovery model released by Moebius Models was a 1/144 scale based on the 496 feet scale.
Johnson also points out that based on archives, the prop used for filming was 57 feet (17 meters).
The prop no longer exists, and Kubrick frequently made changes throughout filming. In the end the most accurate evidence is the actual images shown in the movie.

The handmade production of the Discovery by a collective of top-class modelers.
KAIYODO resident and world-class modeler, BOME, was the Director of production for the Discovery project.
The factory used for production is equipped with the most advanced 3D printing tech and is used by many Hollywood studios for prop production. On-hands production was overseen by Masanobu Oka, who is active with the modeling magazine, “Model Graphics.”
In addition, a collective of modelers and professionals in various fields came together, each contributing their expertise.

While retaining the authenticity of the original prop, this Discovery has been designed to be a display piece.
The 2001: A Space Odyssey – Discovery is 3D printed, hand-assembled and hand-painted.
All components besides the command module are white. Some subtle changes to the tone of the whites give further depth to the overall detail of the ship.
The display stand is made from solid pieces of transparent acrylic. The cockpit is lit from the inside with 4 LED lights. The switch is hidden inside the command module itself. 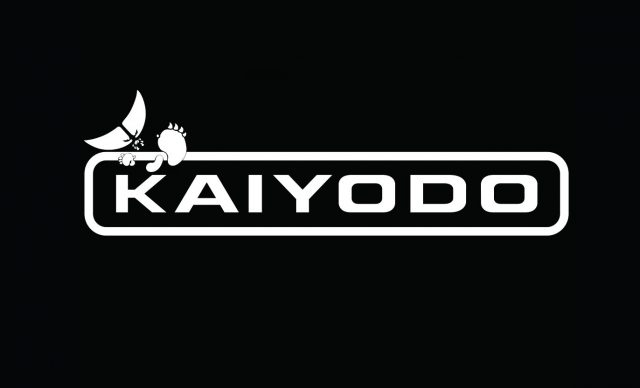 “It has been my dream for many years to make a Discovery replica product. Unfortunately, due to licensing it was never possible. That all changed this year when the Discovery license was due for renewal and we received the go-ahead.
My first involvement with the Discovery was 40 years ago, and started with an unofficial production of the Discovery by a young modeler working with KAIYODO at the time, my associate, Katsuya Nishizaka. It was a scratch-build with the command module built using a Ping-Pong ball.
After watching 2001: A Space Odyssey in the theater as a boy, Nishizaka was so impacted that he spent many years trying to understand it better. What did the port side of the Discovery look like, and what was the order pattern of the containers? Questions like these consumed him. He sought out other researchers from around the world, never losing interest. It was seeing his dedication that made me hope that some day KAIYODO would make an impeccable recreation of the Discovery that would do justice to his research.
40 years later, when the news came that the license was available, he called me right away. Unbeknownst to me, Nishizaka had a huge collection of hand-drawn sketches based on his research. (I was a little disturbed by his level of obsession 🙂 However, at long last his hard work has finally paid off.
In my humble opinion, what we have achieved with this Discovery project is truly noteworthy. From start to finish no stone was left unturned. In the final stages much discussions took place with Adam Johnson, with many of his insights incorporated into what we believe is a truly remarkable 54 feet prop, Discovery replica.”