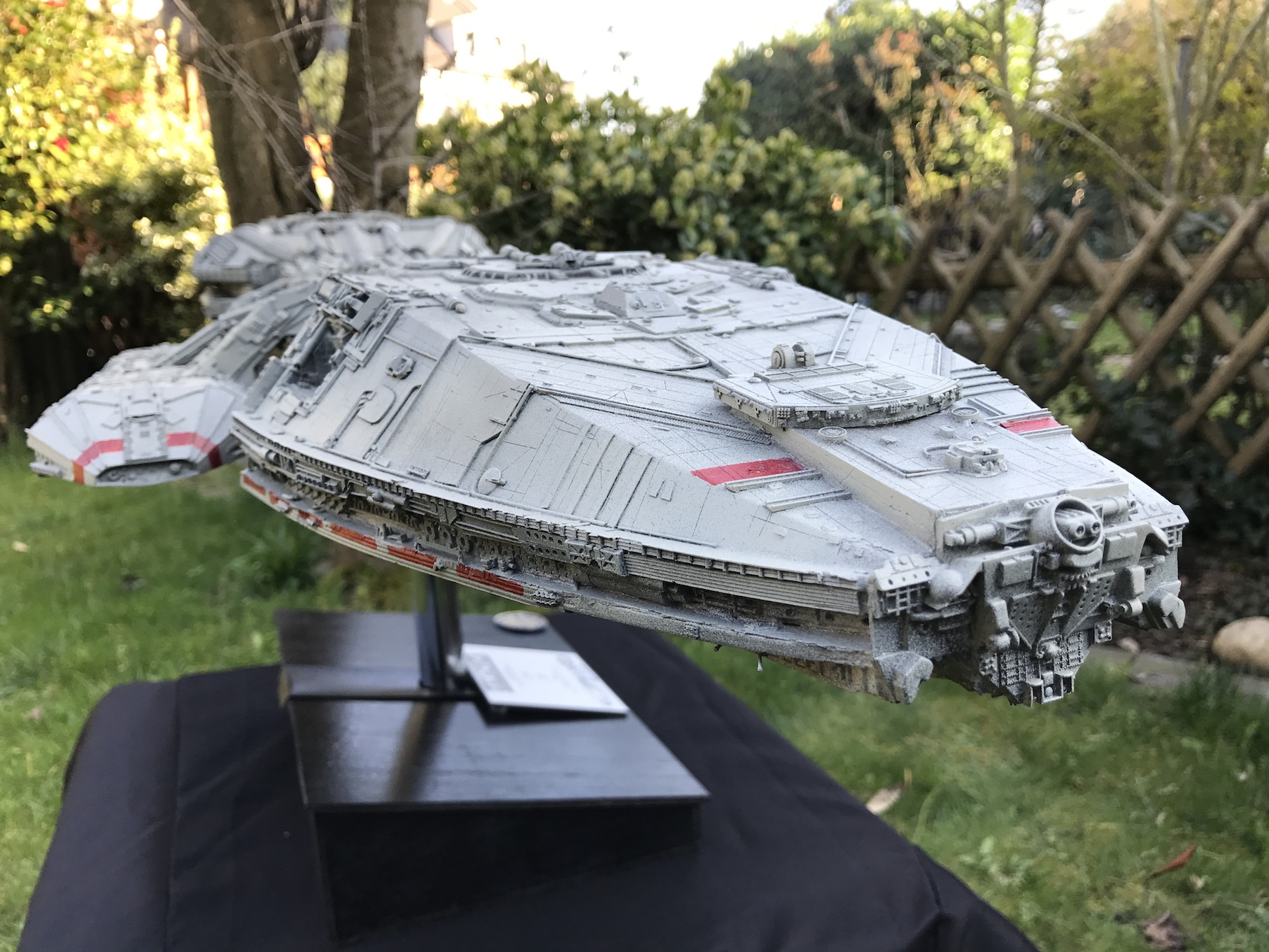 Being a Galactica fan, since I first saw it on TV at the age of 11, I was truly excited when I first heard of Mike Salzo’s attempt to create a 1/2 size studio scale version of the Battlestar. I already own a large collection of props and models but I am not an experienced builder, so ordering it was like walking straight into the mist. Mike sent it quickly and well packed. Some parts were missing so I had to either cast off parts from other areas of the model to duplicate them or create them from scratch using standard plastic kits (especially Monogram´s HMS Sheffield was useful).

I wanted my Battlestar to be as close to the original as possible but I also wanted a fully equipped landing bay. So I built the starboard landing bay the traditional way and put a lot of effort into the port landing bay to get the interior and lighting correct, and also the tiny flashing lights in the entry area. About 400m of light fibers were added to the model, the thinnest being those on the landing strip. 40 tiny holes of 0,3mm diameter and the appropriate fibers. The landing strip itself was made from sanding paper to simulate runway pavement. The tiny Shuttles were bought on the internet, the Vipers consist of parts of sidewinder rockets with extra 0,7mm lightfibres to simulate the jet engines – 3 pieces glued together and then painted with one single hair as a brush. They fit into the launch tubes perfectly.
Other parts were ordered from Shapeways like the highly detailed bridge and the engine grilles.

Since some parts of the model, especially the top of the engine compartment, are little documented and rarely seen prominently on pictures I had to inspect high res Bluray versions of the movies and series and also granted me some artistic freedom. The large pipes that run across the upper surface of the engine seem to have a break at the spot where the hull descends to the center of the Galactica. This is clearly visible on all the shots of the studio version or the in the show. For whatever reason, the people at Apogee left this open as if the pipes were broken. I figured that nobody who would see my model would understand that this was done on purpose so I added pipes underneath and painted them red so that they are clearly visible and now this split looks as if it should be there. Below the red pipes are even more structures but they are not really visible anymore.

The first thing I did after counting and sorting and inspecting the parts of the kit was to strengthen those areas where the resign was thin or appeared to be too thin by pouring more resin on them. Then I added planks of wood to stabilize any larger resin surfaces before I finally added aluminium bars that run from the back to the front through all three main compartments which were then screwed together.

Although Mike’s model is great it lacked a number of details like the central “watchtower” in the first half of the central compartment or the two watchtowers on the right side of this central compartment (utilized in the “Hand of God”-episode). The longer I worked on the model the more details I found to be missing but adding them from standard parts of other kits was easy.
It took me 1.5 years to complete the Galactica, but you can deduct some 3-5 months in which I simply stared at the parts and wondered whether I could ever finish this. In the end it was not too difficult, rather a matter of thinking ahead and being careful. First think, then cut or drill or glue together.

The most difficult part was to fix the landing bays to the model and to get them even and at the correct positions. I had to remove them again once because getting them even on both sides was a bit difficult and they weren´t even after the first try. Of course this imposed the danger on my model of damaging some of these ultra-thin light fibres that run from the bays down to the foot of the model where the light source is located.

Thank you, and all the best!
Stefan 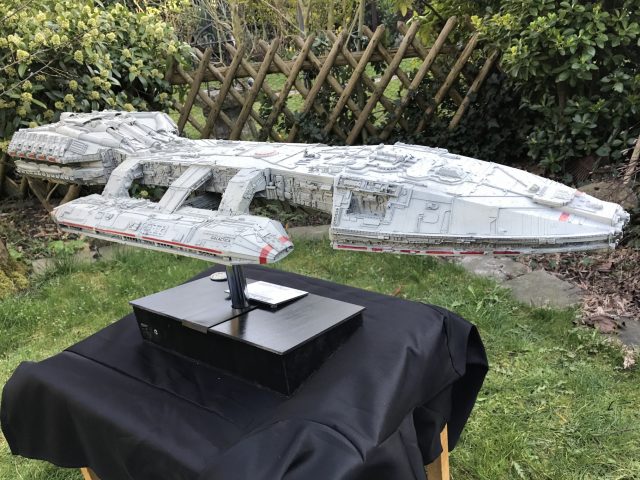 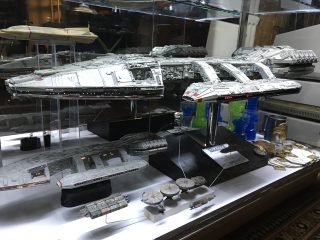 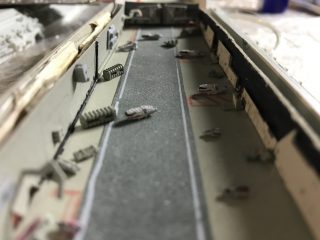 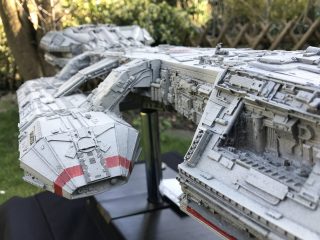 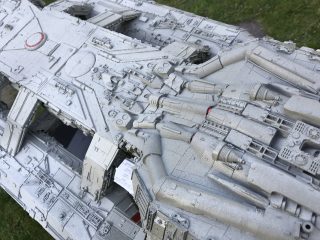 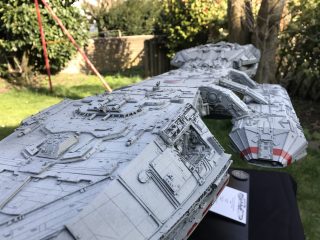 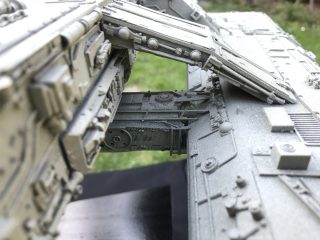 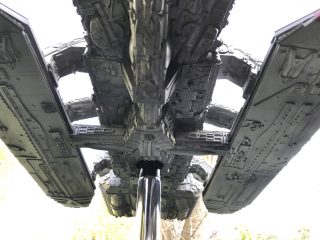 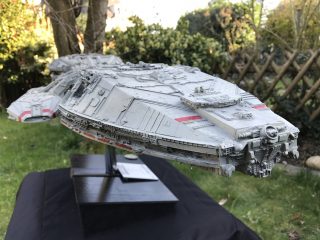 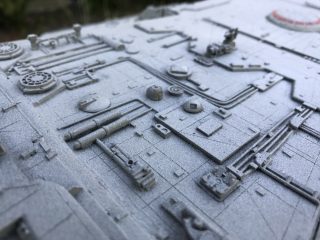 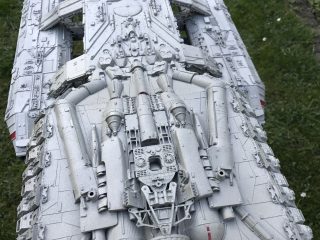 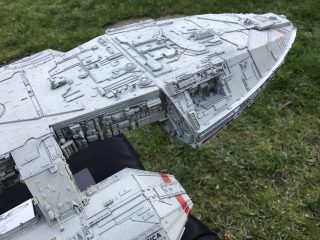 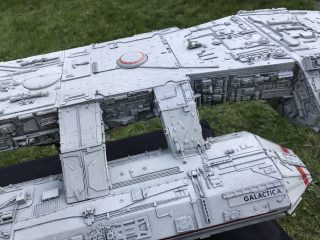 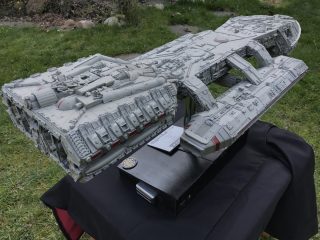